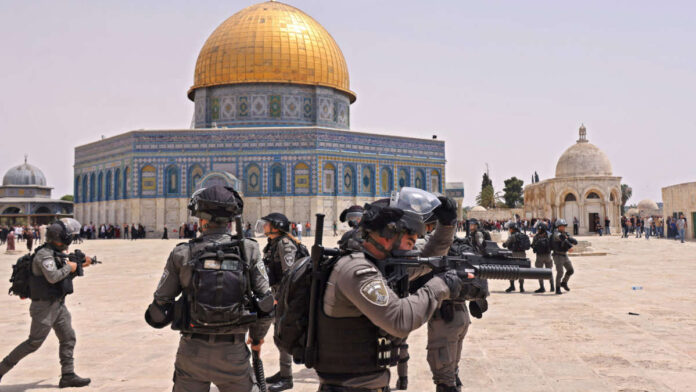 Thousands of Palestinians in Gaza, East Jerusalem and the occupied West Bank were celebrating the freshly implemented ceasefire agreement between Israel and Hamas when Israeli police stormed the Al Aqsa Mosque and attacked Palestinian worshipers.

Israeli police complicated the terms of the ceasefire when they stormed the mosque just hours after it went into effect, firing tear gas and stun grenades at the worshipers after Friday prayers. Hundreds of Palestinians had gathered at Al Aqsa Mosque to pray and celebrate the ceasefire. According to the Palestinian Red Crescent, the police wounded about 20 people in the attack.

The ceasefire agreement was reached on Friday as the region entered its second week of escalated violence from Israeli forces. Israel’s attacks have killed at least 243 Palestinians, including 66 children, over just 11 days. The attacks have also displaced tens of thousands of Palestinians. During the same period, rockets fired by Hamas have killed 12 Israelis, including two children.

Photos from today’s attack by the forces of the occupying power, Israel, against Palestinian worshippers in Al-Aqsa Mosque Compound. #Jerusalem #Palestine #SaveSheikhJarrah pic.twitter.com/A22cRqJIGf

Palestinians and advocates for Palestinian rights reacted in horror to Friday’s Israeli attacks.

“How long must Palestinians endure the terrorism of the Israeli regime? How long will this fascist regime have impunity?” asked Mohammed El-Kurd, a writer from Jerusalem, on Twitter.

El-Kurd also retweeted a photo of a man who was apparently injured by a stun grenade that hit his mouth, breaking his teeth, noting that, “[Israel Occupation Forces (IOF)] soldiers intentionally shoot in the head & the upper body, to cause lasting trauma,” and adding, “Many US police departments are trained by the IOF.”

“Israeli apartheid doesn’t stop,” tweeted the Institute for Middle East Understanding, an U.S. nonprofit aimed at providing information on Palestine to the media, underscoring how, even with a ceasefire in effect, Israel continues to subject Palestinians to the many forms of violence they have endured for decades.

“The ceasefire had to happen, however it does not end the siege on Gaza, the occupation in the West Bank and East Jerusalem, nor the systematic oppression of Palestinians in Israel,” wrote Sally Abed, a Palestinian living in Israeli-occupied Jaffa and leader of the social movement Standing Together.

IfNotNow, a U.S.-based Jewish progressive group, also emphasized the limits of the ceasefire. “Back to ‘normal’ — Israeli forces repressing Palestinians. This is unacceptable,” IfNotNow wrote in response to Friday’s attack on Al Aqsa.

Meanwhile, progressive lawmakers in the U.S. have continued to push for the U.S. government to stop funding and backing the violence that the Israeli state perpetrates against Palestinians.

“A ceasefire is necessary, but will not alone achieve freedom, justice, and equality for all who live under Israel’s apartheid government,” wrote Rep. Rashida Tlaib (D-Michigan) on Twitter. “The U.S. must condition funding to uphold human rights, and end the funding entirely if those conditions are not met.”

President Joe Biden had evidently increased pressure on Israeli Prime Minister Benjamin Netanyahu over the past few days to agree to a ceasefire. But the White House has shown no signs of stopping a planned $735 million weapons sale to Israel, despite the fact that progressives in both chambers of Congress are pushing resolutions aimed at stopping the sale.