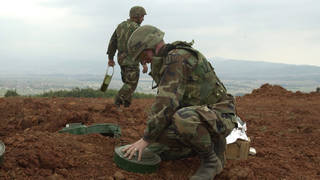 The Biden administration is facing criticism from human rights groups after it announced this week it will leave in place a Trump-era policy to allow military commanders to use landmines across the globe. A Pentagon spokesperson described landmines as a “vital tool in conventional warfare” and said restricting their use would put American lives at risk, despite Biden’s campaign promise to promptly roll back Trump’s policy. Jody Williams, recipient of the 1997 Nobel Peace Prize for her work with the International Campaign to Ban Landmines, says landmines were invented “in order to maim people” and have a devastating impact on children, women and the elderly around the world. “It is an indiscriminate weapon that has no place on this planet.”