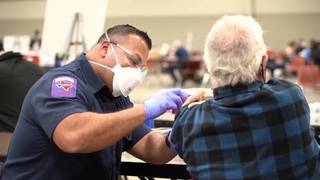 As people try to find a safe way to gather and travel during the pandemic, there is growing interest in documenting who has been vaccinated or tested negative for COVID-19. The World Health Organization has warned so-called vaccine passports may not be an effective way to reopen, and healthcare professionals argue vaccine certificates may further exacerbate vaccine inequality. New York is already testing a digital vaccine passport app made by IBM called the Excelsior Pass, while countries including the U.K. and Israel have issued their own versions of electronic vaccine certificates. The U.S. government has ruled out the introduction of mandatory vaccine passports at the federal level, but many private companies are now developing COVID-19 tracking systems. ACLU policy analyst Jay Stanley says smartphone-based vaccine passport apps “raise a lot of questions” around privacy, access and discrimination. “We have systems in place already for proving you’ve been vaccinated,” he says. “Is that system so broken that we need to construct an entirely new electronic system?”