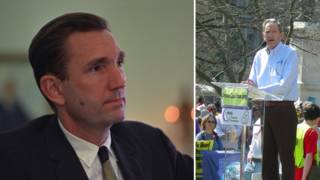 Former U.S. attorney general and longtime human rights lawyer Ramsey Clark has died at the age of 93, and we look back on his life. Clark was credited as being a key architect of the Voting Rights Act of 1965 and the Fair Housing Act of 1968. He served as attorney general from 1967 to 1969, during which time he ordered a moratorium on federal executions and opposed J. Edgar Hoover’s wiretapping of Dr. Martin Luther King Jr., though he was also involved in the prosecution of antiwar activists. After leaving office, Clark became a leading critic of U.S. foreign policy. “The world is the most dangerous place it’s ever been now because of what our country has done, and is doing, and we have to take it back,” Ramsey Clark said while addressing a protest against the inauguration of George W. Bush on January 20, 2005. We also play an excerpt from an interview with Clark about defending the Hancock 38, a group of peace activists arrested at a U.S. drone base near Syracuse, New York.