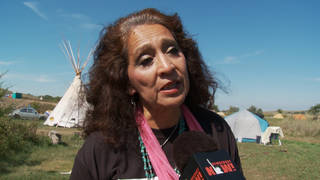 LaDonna Brave Bull Allard, Standing Rock Sioux tribal historian, has died of cancer at the age of 64, and we look back on her work, through interviews on her land and in the Democracy Now! studio. Allard co-founded the Sacred Stone Camp on Standing Rock Sioux land in April 2016 to resist the Dakota Access pipeline, to which people from around the world traveled, making it one of the largest gatherings of Indigenous peoples in a century. “We say mni wiconi, water of life. Every time we drink water, we say mni wiconi, water of life. We cannot live without water,” LaDonna Brave Bull Allard said in a September 2016 interview with Democracy Now! “I don’t understand why America doesn’t understand how important water is. So we have no choice. We have to stand. No matter what happens, we have to stand to save the water.”