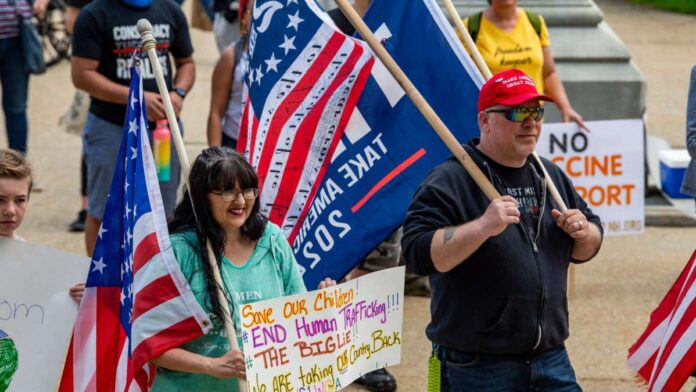 The school board for Williamson County, Tennessee, held a meeting on Tuesday night about taking steps to deal with the terrifying Delta COVID infection surge. After four hours of debate, the board voted to implement a temporary mask mandate for grammar school students and staff, said mandate being set to expire on September 21.

Almost immediately, all hell broke loose. A clutch of infuriated parents mobbed mask advocates to their cars, where they bellowed through the driver’s side of one car window, “You can leave freely, but we will find you and we know who you are.” One mask advocate, a doctor named Britt Maxwell with children who attend school in the district, was called a “traitor” as he left the gathering. “I don’t see how anyone can say that when I’ve been on the frontlines of this pandemic since the beginning, treating patients in rooms, unvaccinated for the vast majority of it, hoping I wouldn’t take it home to my family. For someone to say that is mind blowing,” Maxwell told CNN.

Traitor? To what, exactly?

The answer to that question is easy enough: If you advocate for masks, and even for the vaccines, you are a traitor to Donald Trump, and to the white-power nation he sought to champion had he managed to steal a second term in office. This — all of this — is his war, which he began almost two years ago when he deliberately started going out of his way to disdain masks, science and scientists in his endless quest to buff his image on television.

In doing this, Trump politicized the most basic of pandemic safety measures. It is as if he named Band-Aids un-American, and demanded that we bleed to show our heedless fealty. Trump has been gone since January — in no small part because millions of people were horrified by his behavior regarding COVID — but in the minds of his acolytes chasing school board members through nighttime parking lots, he is and will always be the only leader they will ever follow.

It is not just angry parents at a school board meeting. Governors Gregg Abbott of Texas and Ron DeSantis of Florida are fighting mask mandates tooth and nail, getting crosswise with their own local officials even as hospitals in their states are so packed with new COVID patients that people are practically falling out of the windows. Primetime Fox News personalities like Tucker Carlson weave paranoid fictions out of thin air in order to keep Trump’s base riled and combat-ready. It is all of a piece.

It is as if Trump named Band-Aids un-American, and demanded that we bleed to show our heedless fealty.

Abbott, DeSantis and Carlson are easy to understand: They are filthy opportunists who don’t give a fig for the people they harm. In this, they are all like Trump himself, who could not possibly give less of a damn about the Republican Party, especially if there is a buck to be turned. To their gruesomely belated credit, however, some Republicans are beginning to realize that becoming the Party of COVID is the political equivalent of volunteering for leprosy. The New York Times reports:

They and other national and local GOP officials cast their opposition to such measures as an effort to protect personal choice. But some fear the party is on track to make itself the face of the delta variant — endangering fellow Americans while also risking severe political damage in the long term.

“They’re making a political bet on the lives of the people they serve,” said former Republican National Committee chairman Michael S. Steele, who has been sharply critical of former president Donald Trump and has formed an exploratory committee for a potential 2022 Maryland gubernatorial bid. “The party leadership has gone so far out on this limb that there they stand with a saw in their hand and they’re sawing it off.”

Many of the people rallying to this strange and self-destructive banner are likewise easy to read. Fed a 40-year gorge diet of bigotry and racism by the same Republican Party that now fears for its future, they’ve been told by politicians who want their money that they are losing their culture, their guns, their religion and their standing within society. Donald Trump saw this clearly and set it on fire to light his way to the presidency, and those flames will not be doused anytime soon.

Especially not by him: “According to four people who’ve independently spoken to Trump about a potential pro-vaccine campaign, the former president has shown little interest in tying his name to broader efforts to get people inoculated,” reports The Daily Beast. “According to two of the sources who have spoken to Trump about this, he has occasionally referenced polling and other indicators — such as what he’s seen on TV — that show how the vaccines are unpopular with many of his supporters. This has left the impression with some of those close to Trump that he doesn’t want to push too hard on the subject, so as to not ‘piss off his base,’ one of the two people said.”

I fear — for good damn reason — this will lead to more bloodshed. On Friday, the Department of Homeland Security issued a bulletin warning of the increasing threat of violence posed by Trump supporters who have been convinced the former president will somehow be returned to office this month. “Some conspiracy theories associated with reinstating former President Trump have included calls for violence if desired outcomes are not realized,” reads the bulletin. This chatter is analogous to that which preceded the January 6 attack on the Capitol, but unlike that centralized event, these potential acts of violence might be scattered and difficult to detect until it is too late.

Don’t expect Trump to take any steps to stop such a scenario, either. Like anything that keeps his name in the papers, he loves it. It is his people who will continue to suffer right along with the rest of us, and he could not possibly care less.

The Cannibal King
Eats his own, even without
A seat on the throne…
Copyright © Truthout. May not be reprinted without permission.