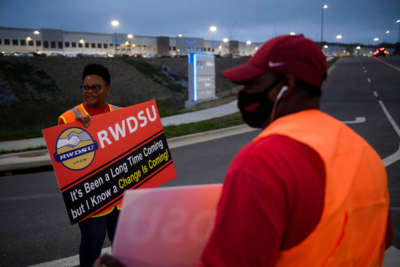 The National Labor Relations Board (NLRB) began counting votes for the unionization effort at the Amazon warehouse in Bessemer, Alabama, on Thursday. With about two-thirds of the total counted, enough “no” votes have been tallied to thwart the union effort. Last-minute revelations about Amazon’s union-busting efforts, however, have the union alleging foul play.

As of Friday morning, there were about 700 votes for the union and 1,700 votes against. Even with hundreds of challenged votes left to tally, Amazon has secured enough votes against the union. The Retail, Wholesale, and Department Store Union (RWDSU) has said that they plan to challenge the results of the election.

“Our system is broken, Amazon took full advantage of that, and we will be calling on the labor board to hold Amazon accountable for its illegal and egregious behavior during the campaign,” said the RWDSU president Stuart Appelbaum in a statement on Thursday evening.

The union has discovered through Freedom of Information Act (FOIA) requests that Amazon had pressured the United States Postal Service to install a mailbox just outside of the warehouse, which could potentially be in violation of labor laws.

RWDSU has argued that the installation of the mailbox on warehouse grounds puts pressure on employees casting their ballots there, making them think that Amazon has some role in tabulating votes and tracking how workers voted. It’s also very likely, the union said, that the company was monitoring the box.

“When you see this box, as you see, it’s right by the front door,” said Joshua Brewer, director of organizing for RWDSU Mid-South, to More Perfect Union. “Everything at Amazon is tracked. Everything is surveilled. So this idea that this massive box that’s 20 feet from the front door of Amazon isn’t being surveilled is ludicrous.”

Amazon has said that they installed the mailbox to make it more convenient for workers to cast their ballots, but “we tend to believe that Amazon is lying,” said Brewer. The company, emails obtained through FOIA show, had repeatedly pressured USPS to install the mailbox just as the election was beginning. The election was conducted completely by mail.

The mailbox was critical for Amazon’s strategy because it wanted to pressure employees to bring ballots to work that they’d received at home in the mail.

By doing this, they could then pressure and monitor employees to submit “no” votes.https://t.co/IIOtPlf3ZU

“Even though the NLRB definitively denied Amazon’s request for a drop box on the warehouse property, Amazon felt it was above the law and worked with the postal service anyway to install one,” Appelbaum said in a statement. “They did this because it provided a clear ability to intimidate workers.”

In the past few months, Amazon has used many tactics, some illegal, to sabotage organizing efforts. In Alabama alone, the company has spent likely upwards of millions on anti-union consultants to crush the union effort and has hired police to intimidate workers and union supporters.

Workers have said that the company has also hung anti-union posters around the workplace — including in the bathroom. And they say that they’re forced by management to attend long meetings sometimes multiple times a week and get messages sent to their phones in attempts to discourage them from supporting a union effort.

Amazon has many years of experience in crushing unions. Labor laws in the U.S. are often too weak to deter a behemoth like Amazon from pursuing illegal union-busting methods.

Teens Who Lack This Are More Likely To Binge Drink And...