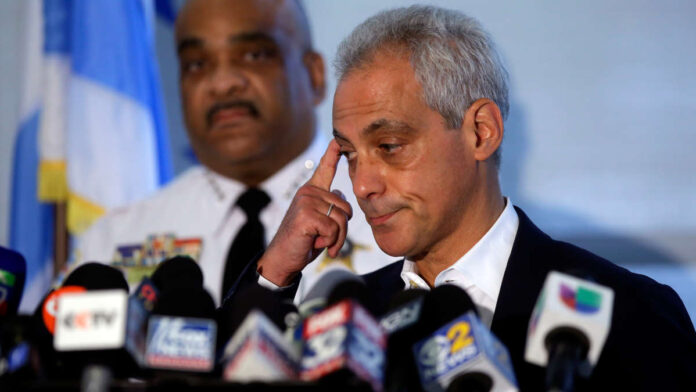 Remember the song about the cat? Well, the cat came back the very next day / Oh, the cat came back, they thought he was a goner but the cat came back / He just couldn’t stay away… Well, it won’t be official for a few weeks, but the word landed yesterday: Rahm Emanuel, among the most despised individuals within and without Democratic Party politics, will be named U.S. ambassador to Japan. The cat came back, and has apparently landed a key assignment in the foreign service.

It’s hard to know where to begin explaining why Mr. Emanuel is so perfectly despicable: There is simply so much to say. The groan that passed through progressive politics upon this announcement was low, and slow, and thoroughly exasperated. President Biden had been sternly warned not to include Emanuel in his administration, and almost four months in, it seemed as if he had listened. He did not.

Given that the police murder of George Floyd (among so very many others) and the subsequent conviction of his killer, Derek Chauvin, all happened within this last year, it is proper to begin any discussion of then-Chicago Mayor Emanuel with his alleged cover-up of the police murder of Laquan McDonald.

McDonald, a Black teenager, was shot 16 times and killed by Chicago Police Officer Jason Van Dyke in 2014. The shooting was initially ruled justifiable. Thirteen months later, after a court order mandated the release of Van Dyke’s dashboard camera, the footage showed McDonald walking away from Van Dyke when he was killed.

Van Dyke was arrested that same day and charged with first-degree murder. He was eventually convicted of second-degree murder and 16 counts of aggravated battery, and sentenced to almost seven years in prison. Three other officers were accused of conspiracy and obstruction of justice for trying to cover up the shooting, but all three were acquitted in a bench trial in January 2019.

Mayor Emanuel, in the middle of a tight reelection campaign when McDonald was murdered, was accused of burying the dashboard video for 13 months in order to improve his reelection chances. A deeply questionable $5 million payment to the McDonald family by the city council, and the firing of Police Superintendent Garry McCarthy, augmented those accusations. Calls rose for Emanuel to resign, but he refused.

“Van Dyke shot McDonald on October 20, 2014 — almost six months before the general election,” wrote Chicago Reader columnist Ben Joravsky in November of 2015. “By February, word had already emerged about the tape of the shooting. As impossible as this sounds, just imagine Mayor Emanuel had released the video in, say, November — without being forced to by a lawsuit. Cook County state’s attorney Anita Alvarez probably would’ve quickly responded with an indictment — just like she did earlier this week, when the tape actually was released. I mean, it’s really hard to look at that tape and not call for an indictment. If the mayor had done that, he wouldn’t be the villain in this sordid story. He’d be the hero. Or at least the guy who finally, for once in his life, did the right thing…. But of course, he didn’t do the right thing. He buried the video. He allowed officials to mislead the public.”

Biden is presiding over a nation that has borne witness to the relentless police murders of Black people, which have fueled mass uprisings over the past year, and still thinks a man with the stains Emanuel bears is a proper choice for any post, much less an ambassadorship of such vital strategic and diplomatic importance.

For that reason alone, this is a disgraceful appointment on the part of the president, and one that must be reversed. Because it is Emanuel we’re talking about, of course it is not the only reason. The litany of hubris-driven failures Emanuel saddled the city of Chicago with before finally leaving office in abject disgrace is the stuff of Greek tragedy.

In every sense, Emanuel pathetically sought to fashion himself as a “boss” in the bullying, old-school Chicago style of the first Mayor Daley. In the end, he proved to be nothing more than a hack with a knack for powerful friends and the instincts to survive his own bottomless derelictions.

What is it about Emanuel that causes him to leave smashed pieces of good things in his wake wherever he goes?

“If Biden is being honest about his plans to be an American president who brings people together, the post-Rahm state of Chicago should be all the proof the president-elect needs to know that Emanuel isn’t the guy for any job,” wrote Patch columnist Mark Konkol in November of 2020. “America deserves better leaders than a failed mayor whose top City Hall lawyer brokered a deal with a poor mother — $5 million to keep secret a video showing a Chicago cop fire every bullet in his gun, 16 shots, until her Black teenage son was dead — that saved his re-election bid. Take it from a city that knows.”

What is it about Emanuel that causes him to leave smashed little pieces of good things in his wake wherever he goes? The answer lies in his core political beliefs, which can be described as an amalgam of every bad right-swinging idea the Democratic Party came up with in the wilderness of the 1990s. Emanuel is every inch the Clintonian Third-Way Democrat; thus, his knack for taking bad Republican ideas and making them worse. In this time of reckoning, when the party has looked back on that era and deemed it mostly a failure, Emanuel clings to the shreds of that ideology like an overboard yacht owner whose boat was devoured by termites and sank out from under him.

A short list of his notable positions over the years includes his staunch support for the Iraq War in 2003, which puts him in company with the president. He has been dogged in his pursuit of a war with Iran and passionate about increasing defense spending whenever the opportunity arises. He is a stalwart supporter of Israel, having served as a civilian volunteer for Israel’s army in the early 1990s. Emanuel has lent vocal support to Israel’s assassination policies as well as its military actions, such as the 2006 attacks on Lebanon that were denounced by Amnesty International.

And Biden is sending this person to be our ambassador to Japan. This appointment puts Emanuel front and center to one of the most perilous diplomatic and military situations on Earth: the U.S.’s so-called “pivot” of power and influence toward Asia, and China’s potential response to such moves. America’s “Man in Japan” will play a key role in whatever comes next, and Emanuel’s thoroughgoing hawk bona fides make him a genuinely belligerent choice for the post.

“The Biden administration is busy trying to make good on the long-delayed pivot to Asia by putting more military assets in the Western Pacific,” reported Foreign Policy last month, “but it is still trying to figure out how to manage Beijing’s growing axis with Moscow, which a 2019 U.S. intelligence assessment described as more aligned than at any point in the past 60 years. Chinese President Xi Jinping once described Russian President Vladimir Putin as his ‘best friend and colleague.’”

Rahm Emanuel, like the cat, is back. The nation is diminished for it, and maybe in actual danger because of it. The man does like a good war, after all. From Japan, maybe he can cheerlead for one. Again.