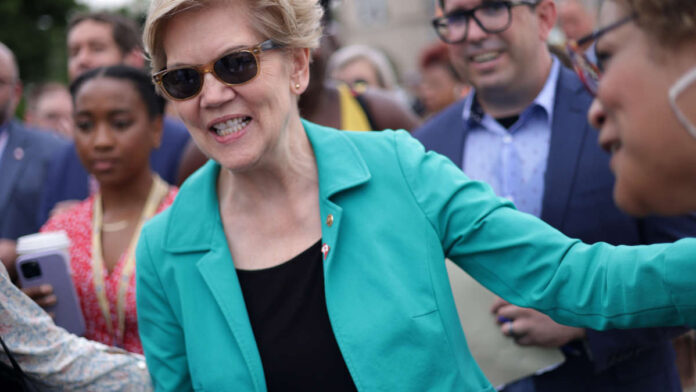 Democrats on Tuesday renewed their call for President Joe Biden to extend the student loan debt pause and make good on his campaign promises to cancel student debt.

“We’re here today to call on President Biden to extend the pause on student loan payments, which right now is set to expire in September,” Schumer said. “It’s proven to be one of the most effective steps that the government has taken to help Americans get through the health and economic crises created by COVID-19.”

Schumer said making student debtors pay their loans back now, as the nation is still undergoing the pandemic, is “harsh, unfair and, in many instances, would be cruel.”

This has frustrated progressives and Democrats who say that Biden could cancel student loan debt with “a stroke of a pen.” Though his chief of staff hinted earlier this year that he was exploring the possibility of cancelling even up to $50,000 of debt, as progressives have urged, the president has yet to act on the proposal.

This week’s effort to influence Biden is one of a series of attempts by Democrats to get the president to take action on student debt. Last month, Schumer, Warren and Pressley, along with nearly 60 other colleagues, signed a letter urging Biden to extend the pause. In the letter, Warren and colleagues urged Biden to extend the pause until March 31 of next year or whenever the economy reaches pre-pandemic levels, whichever is longer.

Schumer said on Tuesday that the student debt pause has demonstrated the importance of student loan cancellation. “We’ve heard about how being saddled with this debt has affected millions of Americans’ lives and so many choices that they’d like to make,” he said. “They’re not able to pursue the career they want. They’re putting off getting married and starting a family. They aren’t able to open a business, buy a house, buy a car, which many of them need to get to work.”

“We know how much of a difference extending the pause makes,” Schumer continued. “Well, ten times over cancelling $50,000 in debt would be even more important and helpful” to help revive the economy and address racial disparities in student loan burdens. As the lawmakers have pointed out before, student debt disproportionately affects Black people and other groups like LGBTQ people.

Warren pointed out that people who never graduated college but still carry student debt will especially be affected if student loan payments are reinstated. She pointed to a recent Pew study, which found that two-thirds of borrowers have said that it will be difficult for them to begin payments on student loans again if they were to restart soon.

Student debt has risen precipitously over the past decades. In 2004, borrowers collectively owed $250 billion; now, borrowers owe about $1.5 trillion. That’s $1.5 trillion not in the pockets of the people with debt — about one in eight Americans.

“These people live with a sword over their heads, and every day that goes by, that sword draws a little closer,” Warren said. The Massachusetts lawmaker has been calling for months for Biden and the Education Department to give relief to borrowers, sending letters to student loan servicers and the Education Department requesting information on how borrowers are affected by loans.