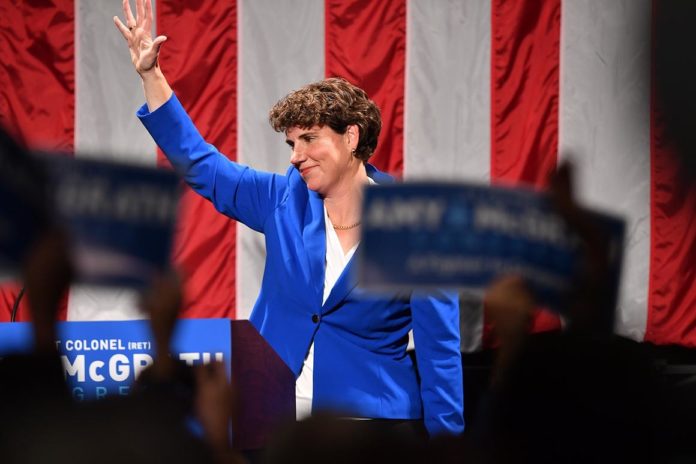 Amy McGrath, a Kentucky Democrat and former fighter pilot who lost a House race last year, said Tuesday she’s running for Senate against Majority Leader Mitch McConnell in what could be one of 2020’s most expensive races.

The 44-year-old former fighter pilot is a major recruit for Democrats, but she faces a seriously uphill challenge against the Kentucky Republican, who was first elected to the Senate in 1984 and has been party’s Senate leader since 2007.

McGrath told POLITICO in an interview Tuesday afternoon that she learned lessons from her first run for office and expected a different result in 2020 despite running in a state that is significantly more Republican than the congressional district she lost.

“I do think this race is winnable, even though it’s a red state,” McGrath said.

McConnell won his last race in 2014 by 15 percentage points, and President Donald Trump carried Kentucky by nearly 30 points in 2016. But Democrats hope McGrath, who pulled in more than $8 million for her House race in 2018 and has a proven online fundraising base, will be able to raise the money and has a profile that will make her competitive against McConnell. GOP Rep. Andy Barr defeated McGrath last year, 51 percent to 48 percent, in a district Trump won by 15 percentage points in 2016.

“Everything that’s wrong with Washington had to start someplace,” she said in a video launching her campaign.

McConnell brushed aside any concern about the race.

“It will be a spirited race,” McConnell said. “Particularly since I’ve become leader of my party in the Senate I’ve noticed I get more attention than I used to. And I look forward to the contest and laying out our differences to the people of Kentucky.”

Democrats believe McConnell may be vulnerable because polling consistently shows him to be deeply unpopular in his home state, even among Republicans. But McGrath faces a tricky path to making the race competitive: Trump is expected to win convincingly in Kentucky, a state where he remains popular, and McConnell is likely to run on having achieved results for Trump’s agenda.

McGrath attempted to create space between the two Republicans during her launch, leaning on Trump’s 2016 promise to “drain the swamp.”

“Who is the epitome of the swamp? Mitch McConnell,” McGrath said. “I think many Kentuckians recognize that. That’s my approach.”

Allies to McConnell view the approach as laughable.

“I find it a curious strategy, especially when you consider that if she sticks with it, Trump himself is going to show up in this race and say, ‘She’s full of crap. Nobody does more to help me than Mitch,’” said Scott Jennings, a GOP strategist and adviser to McConnell.

Rep. John Yarmuth (D-Ky.) said he thought the race was winnable for McGrath and argued massive attention on the Senate contest could actually help McGrath separate the two Republicans and mitigate the effect of Trump at top of the ticket. But he said McGrath needs to walk a fine line between criticizing McConnell and appearing to be supportive of Trump.

“I think she needs to be more careful to make sure she adds, ‘I don’t support the Trump agenda.’ But for those Trump supporters who think about voting for Mitch, he’s the reason you’re not getting what you promised,” Yarmuth said in an interview.

Republicans are also likely to paint McGrath as the choice of national Democrats and tie her to the presidential field in the hopes of turning off Trump supporters. McGrath immediately tried to separate herself from the 2020 Democratic presidential field, calling herself a “moderate” on MSNBC and saying she thought many of the presidential candidates were “pulling a little too far to the left” during the presidential debates.

But more than a half-dozen of those candidates tweeted out support for McGrath or shared her launch video. McGrath acknowledged those endorsements weren’t necessarily helpful in Kentucky but pointed out that she defeated a Democrat backed by the national party in a primary in 2018.

Senate Minority Leader Chuck Schumer (N.Y.) also downplayed his role in recruiting her for the seat Tuesday, saying McGrath entered the race “on her own” because of a sense of “duty and honor.”

“She realizes this is a tough fight,” said Schumer. “She realizes Mitch McConnell will throw everything but the kitchen sink at her.”

McConnell’s team was ready to push back against McGrath’s launch, with a website and a video featuring quotes from McGrath during her run for Congress, including her calling herself “more progressive than anybody in the state of Kentucky” at an out-of-state fundraiser, criticizing Trump’s border wall with Mexico as “stupid” and saying Trump’s election was similar to “the feeling I had after 9/11.”

In a statement, Kevin Golden, McConnell’s campaign manager, called McGrath “an extreme liberal” and said the attacks previewed in the McConnell campaign’s video provide “a heckuva platform that we will be delighted to discuss over the next 16 months.”

McGrath defended herself against two of those GOP attacks in the interview with POLITICO. She said Republicans’ claims that she was actually comparing 9/11 to Trump’s election took her comments “out of context.” But, she said, she felt the 2016 election made her “step back and reflect” on the country’s direction and her role in its future.

“I think that I took stock after 9/11, like all Americans, and tried to figure out, ‘Where do we go from here?'” McGrath said. “And I did that [after Trump’s election], and in the same manner I took stock and I said, ‘Where do we go from here? What do we need to do?’ I don’t think it was a slight on 9/11, or the people who were dying, or any of that. I fought for my country.”

McGrath also said the “progressive” descriptor was taken out of context. She said that she recalled that comment being made when she was asked about gun control in relation to mass shootings, and she told the audience she supported the Second Amendment and didn’t believe in taking away guns from lawful owners — but said she supported background checks for gun purchasers.

“If you want anyone left of that in Kentucky, you’re not going to find them. Ok? I’m a Kentuckian. This is who we are,” she said, reiterating her recollection of the full context of those remarks.

Still, Republicans are likely to consistently revive those attacks and others from her 2018 race, following a similar playbook that helped Barr survive the Democratic wave.

“The fact that they got an opponent in Kentucky that lost a House race in a very good year for Democrats, I’m not sure is any kind of a bombshell development in that race,” said Sen. John Thune (S.D.), the GOP whip. “As you’ve seen before, Sen. McConnell comes ready to play when it comes to elections.”

McGrath may not have a clean path to the Democratic nomination. Matt Jones, a sports-talk radio host in the state, has been mulling a run and said Tuesday he wished McGrath the best but had not ruled out running against her.

“I am still considering it,” Jones said on his radio show. “I will say running against the Senate majority leader is a big deal, and now you throw in you’ll have to run against the national Democratic Party, too — that’s a lot.”

How Apps and VR Therapy Can Help OCD Patients

Where Is Weed Cheapest And Most Expensive In The US?