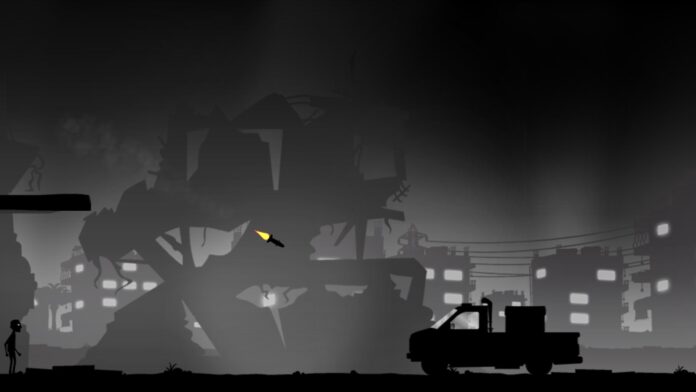 Five years after its release, Liyla and the Shadows of War is more relevant than ever—and it’s making an impact beyond the screen.

There’s an inescapable heaviness when you’re dropped into the world of Liyla and the Shadows of War. You play the game as Liyla’s father, jumping through rubble, hiding behind trash containers, and running from Israeli bombs hitting the Gaza Strip. Your goal is to protect your daughter. But you can’t—no matter how many times you play, no matter what you do. Unlike your typical mobile game and much like war itself, there are no extra lives, no superpowers, and there is no winning.

“I saw the picture of a father carrying the body of his dead daughter. And I asked myself, what if I couldn’t protect my family? What if this happened to me?” For Rasheed Abueideh, a 37-year-old father of four, this was not an exercise of imagination but a very real possibility.

In 2014 the Palestinian software engineer watched from his home in Nablus as Israeli ground bombardments and air strikes hit the West Bank, a mere 130 kilometers from him. This sparked an idea that scared him, one that could cost him his liberty: making a video game about the war.

“I’m living in Palestine, and if you do something that makes a noise, you’re risking your freedom.”

He started his work in secrecy, being careful not to share anything on his social media platforms. He assembled a team consisting of mostly international members—so as to not put anyone in danger. This was the beginning of Liyla, a 20-minute-long platformer/choose-your-own-adventure mobile game heavily influenced by the art style and the gameplay of Limbo and by some story beats of The Last of Us.

But Abueideh didn’t want to use his game as mere escapism: “Palestinians in the mainstream media are always dehumanized. Their personal stories are not covered, they ignore that we exist, that we have feelings, that we are living under attack, and that we don’t have rights as everyone else in the world. I tried to make something to break that,” he told WIRED in an interview.

Abueideh makes sure you know that the game was based on actual events. It’s the first piece of information you’re confronted with when you start playing, and you feel it all throughout the gameplay.

Many, if not all, of the elements in the world of Liyla were modeled after photos taken during the war and distilled into a very minimalistic art style heavily reliant on silhouettes and completely devoid of color, except for the flares of the rockets and the plumes of the explosions. For Abueideh, the likeliness to reality was an essential part of his development process.

“People were killed, actually. This isn’t just a game. It has a much deeper meaning. So by connecting all of these images, I wanted to reflect exactly what happened and to be able to convey the exact emotion of the person in that situation.”

It was this effort to reflect exactly what happened that was the most challenging for Abueideh. For the two years he worked on the game, he had to read and watch footage of the war over and over again, “I was literally crying sometimes while writing the code or designing the game. It was hard,” Abueideh says. “The war lasted for 51 days, and I repeated that for 2 years.”

In 2016, the year of its release, Apple wanted Abueideh to recategorize Liyla in the App Store under the “News” or “Reference” category rather than under “Games,” due to what it considered to be political messaging. This brought on a wave of support from players, which eventually pushed Apple to relent and display Liyla as a game.

“It was kind of shocking for me, because from the first day when I released the game, and it was banned [by Apple], I got huge support from everyone, which also gave a huge boost for the game.” In November 2016, Liyla went on to win the Excellence in Storytelling award at the first International Mobile Gaming Awards for the Middle East and North Africa. That was one of the 12 other nominations and special awards it collected the same year.

For Abueideh, video games are at the same level as other media, and they even have a crucial advantage: When you retell a movie or a book you watched or read, you usually speak about the journey of the hero. “But in games, you talk about your experience. You say ‘I did that.’ That is because you become one with the main character of the game,” Abueideh reflects.

That empathy that games generate makes them a “more engaging way to share messages, feelings, and experiences with everyone,” he says.

But how does this work in Liyla, where the events being shared are the horrors of war, occupation, and genocide? “I had to break the rules of game design,” Abueideh admitted.

In one instance, for example, the game presents you with a choice. After barely surviving bombings and shootings, you make it to the beach. There, you encounter four boys playing football. Your daughter, Liyla, asks you if she can go offer the kids to join both of you. Most of the players choose for Liyla to try and save the kids, but that leads to the death of both your daughter and the boys, who are shot and killed by naval fire.

And then, it’s game over.

This section was inspired by the massacre of July 16, 2014, when an offshore Israeli naval vessel fired two rounds into a beachfront area in Gaza City. Four friends, aged 9 to 11, were playing football there and couldn’t outrun the second shell. They were killed instantly.

In typical choose-your-adventure game, the players’ decisions can influence the story. Abueideh wanted the opposite. “In this game, even if you think that you have a choice, you don’t. You’re powerless and weak. You cannot do anything, and the boys will get killed. I wanted the players to get a glimpse of that feeling.”

Once Liyla came out, Abueideh got to see players step into the role of Liyla’s father and react to the difficult choices they had to make to keep her safe. Abueideh has watched gameplays of Liyla on YouTube and has even gotten personal messages about people’s reactions to it.

“I got many messages on my email saying, ‘Thank you for making this game,’ ‘thank you for sharing this experience.’ I would not go on to say I was ‘happy,’ because it’s not a happy experience, but it showed what I needed to show.”

Perhaps the most important review was from his own children, who have played the game several times. When Liyla first came out, they were too young to understand why she couldn’t be saved. Now part of Liyla‘s reality is reflected in their lived experiences.

“We can’t ignore that. That is part of our lives. We face this not day to day but moment to moment. Second to second. So they are raised with this in their minds.” Abueideh says.

There are, however, other ways in which real events are connected to Liyla. In 2014, the Israeli army shelled three schools run by the United Nations Relief and Works Agency (UNRWA), a branch of the UN in charge of protecting Palestinian refugees. In total, during 2014, 118 UNRWA facilities were damaged, including 83 schools and 10 health centers. Those actual events are part of the gameplay of Liyla.

Seven years later, in 2021, after the crisis flared up again and the Israeli Army launched a campaign of air strikes in Gaza, indie game developers Alanna Linayre and Rami Ismail launched a solidarity campaign, together with Abueideh: the Indie Bundle for Palestinian Aid, a collection of over 1,000 games with Liyla as the centerpiece. The bundle raised nearly $900,000, all of which was donated to the UNRWA, the agency that built the schools whose destruction was depicted in Abueideh’s game.

“The UNRWA provides aid for millions of people in Gaza, so it was kind of the perfect match for this bundle,” says Abueideh. “It wasn’t only about raising money; it’s also about raising awareness.”

Though Abueideh is proud of the impact Liyla continues to have throughout the years, it is not something that he hoped would continue when he first developed the game. “I don’t want Liyla to be relevant anymore,” he says. “I want this game to be a part of history, not a part of the present time.”

Liyla and the Shadows of War is a free download for Android and iOS. The Indie Bundle for Palestinian Aid has already concluded; however, you can still donate to the UNRWA by following this link.

Four Years After It Was Heavily Damaged, Mosul’s Iconic al-Nuri Mosque Is Being Rebuilt

JPMorgan to sublet office space as it ponders work-from-home

As the Housing Supply Hits a Record Low, Is There Anything Left to Buy?