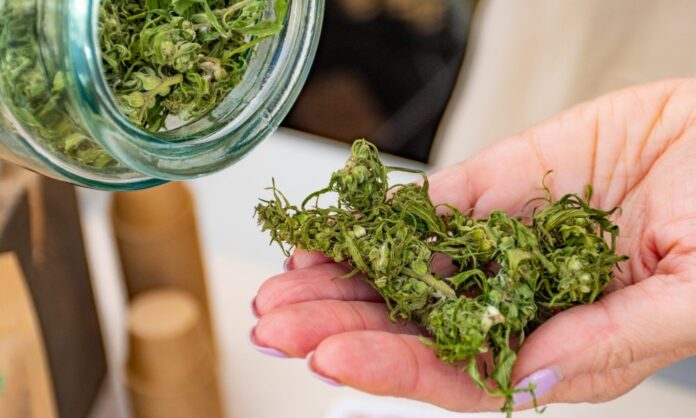 The range, from lowest to highest, was as follows:

Why Is Cannabis So Cheap In Connecticut?

“The CT example is surprising, and we made sure to exclude second cuts and grind. There are only four licensed growers in CT, and only 17 medical dispensaries opened at present. But it seems supplies are plentiful relative to demand. We say this because the five stores that we surveyed in CT had a combined 246 SKUs of flower in 3.5g formats, which is well above most of the other medical states that we surveyed ex PA and MD (NY 22; FL 82; VA 88; OH 171; NJ 239; PA 427; MD 516). The lower prices may be reflective also of the quality available,” Zuanic wrote.

Florida Weed Is Cheap Too

Excluding CT, FL had the lowest flower prices among the medical markets surveyed by Cantor.

Zuanic assumes this is partly related to the increased price competition in the state, although it does not have historical data to use as a benchmark.

Middle Of The Road

Zuanic explained that in NY, the legal industry has to compete with a large illicit market, which he thinks, explains NY prices being 26% below VA (a state that also only recently approved the sale of the whole flower).

“NY just began selling whole flowers, but supplies remain scarce. Yes, there are 40 med stores in the state, but we only counted 22 whole flower SKUs in the five stores surveyed (the five MD stores we surveyed had >500).”

Zuanic estimates New Jersey’s medical sales at $375 million on an annualized basis, while Headset estimates Pennsylvania’s at $1.18 billion per annum. About 3% of the PA population are active patients compared with 1.3% in NJ.

Zuanic found medical prices in PA to be the highest (for flower) among the medical states except for VA. He noted this “reflects a vibrant med market in PA for quality whole flower (pop penetration).”

RELATED: These States Have The Highest Cannabis Sales Taxes In America

Zuanic also noted that the medical market in New Jersey has not developed much on the demand side, which coupled with a large illicit market, “probably explains NJ prices being well below VA.”

Illinois And Massachusetts: The Highest Prices Across Recreational States

Although MA wholesale prices are 11% lower than IL, retail prices are ~20% lower, probably due to a higher store count in MA. “Based on the official state data, IL now is at an annual run rate of $1.79 billion in recreational and medical sales” while “MA is at $1.63 billion.”

The Virginia medical market is in the early stages. “There are only six dispensaries opened, and we estimate the current patient count at only 35,000 (0.4% population penetration). That said, even though SKU counts are below other states, the average of 18 whole flower 3.5g SKUs per store in VA is well above the 4.4 average of NY. We think the higher prices vs. NY are explained mostly by the larger illicit market in NY.”

NV is a more segmented market. “In NV we surveyed five stores, with AYR Las Vegas having an average price of $11.26 vs. $12.40 for Reef Las Vegas, and the other three stores with prices above $13.60 (MedMen LV, Curaleaf LV, Rise Carson City). We think NV may be a more segment market at retail (in terms of price range).”