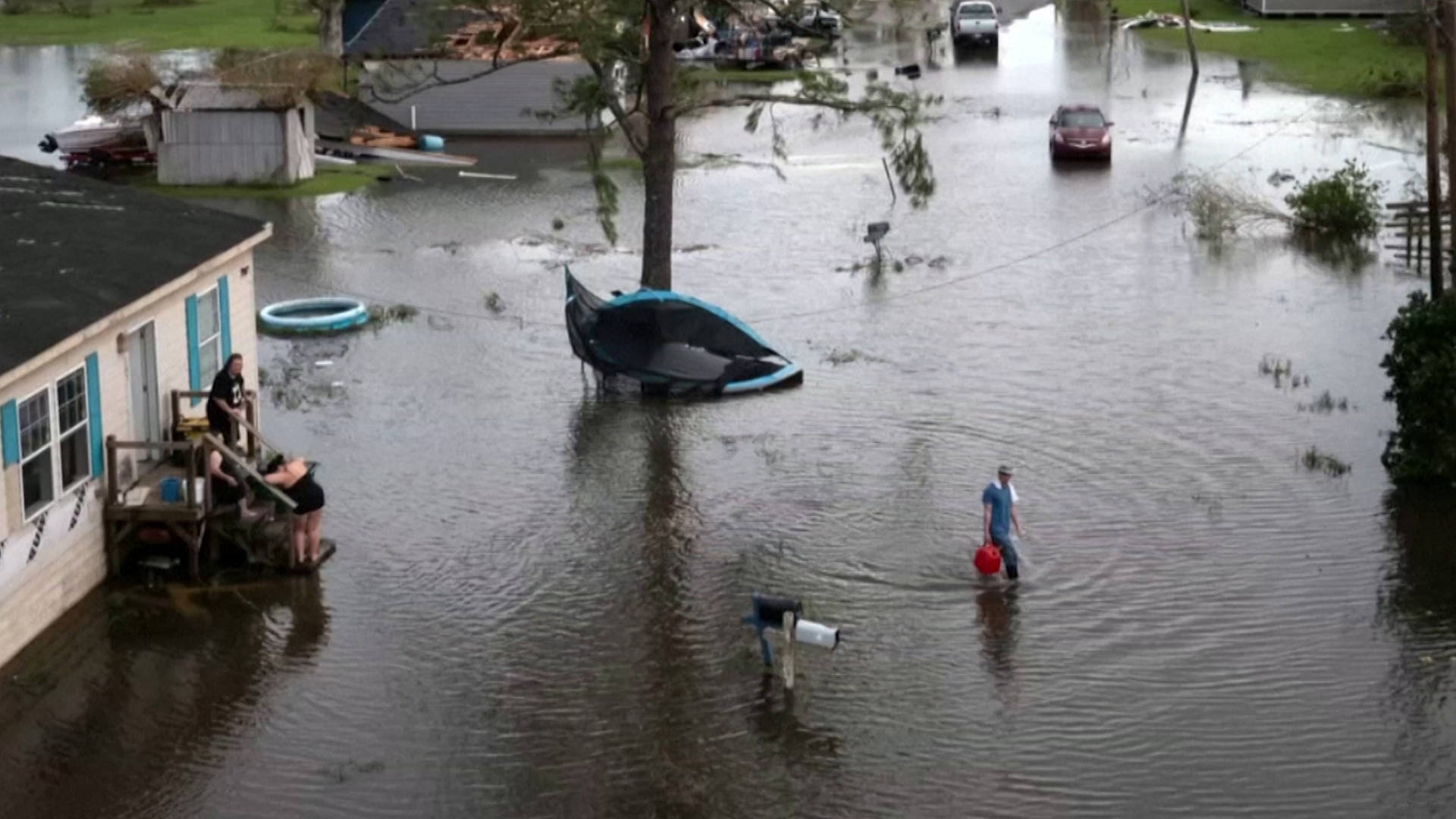 Hurricane Ida has been downgraded to a tropical depression, after it hit the Louisiana coast Sunday as a Category 4 hurricane on the 16th anniversary of Hurricane Katrina. On Monday, it continued to bring torrential rain and flooding to Louisiana and southern Mississippi, where two people died when a flooded highway collapsed. Louisiana’s main utility company, Entergy, says it could be weeks before it restores electricity to nearly a million people in the storm’s path, including all of New Orleans, as temperatures rise to near 90 degrees Fahrenheit.

Meanwhile, the New Orleans Police Department drew criticism for diverting resources from helping vulnerable residents to sending out what it called “anti-looting” officers. Some of this recalled the aftermath of Hurricane Katrina, when the media and police spread misinformation that left people stranded without basic necessities as more than 1,800 people died in Hurricane Katrina and its aftermath.

For more, we’re joined by two guests. Reverend Lennox Yearwood is president and CEO of the Hip Hop Caucus, a civil and human rights group. He’s originally from Shreveport, Louisiana. After Hurricane Katrina in 2005, he helped lead protests against racial profiling of survivors and established the Gulf Coast Renewal Campaign. He’s also a climate justice activist and Air Force veteran who’s spoken out against the U.S. wars in Afghanistan and Iraq. He’s joining us from Washington, D.C.

Also with us, Flozell Daniels, president of the Foundation for Louisiana, formerly known as the Louisiana Disaster Recovery Foundation, founded just days after Hurricane Katrina. He’s a New Orleans native and lives there. He joins us from Katy, Texas, where he evacuated for Hurricane Ida. He’s also a member of Louisiana Governor John Bel Edwards’ Climate Task Force.

We welcome you both to Democracy Now! Flozell Daniels, if you could describe your decision to relocate — now many who stayed are being told to relocate because of the blackout right now, no power to a million people in the New Orleans area — and what you’re hearing about what’s happening on the ground?

FLOZELL DANIELS JR.: Thanks, Amy. I’m glad to be here with you.

You know, my family and I decided to relocate because we are natives of Louisiana. And what you’re going to find time and time again is that Louisianans know and understand how to take care of themselves. There’s a lot of wisdom on the ground. We understood the science of this storm. We understand that climate is driving the severity of these weather events — and we could talk some more about that. And so we knew it was going to be a dangerous storm. So it made sense for us, and we have the privilege of having the resources and family and friends who could take us in, here in Katy, Texas, so that we could roll up our sleeves and start to get to the business of doing the work to not only do emergency response from the perspective of social justice philanthropy, but also begin to build out a just and fair recovery from Hurricane Ida.

I think what we’re hearing on the ground and what we know for certain is that we had some real struggles with regard to even emergency response. If you think about the layers of disaster we’re already dealing with — COVID, the spikes caused by the Delta variant, the economic calamity that Black and Indigenous and people of color in poor and rural communities, our neighbors who are queer and trans and gender nonconforming — these are disasters that were already happening, Amy, before Hurricane Ida hit the shores as one of the strongest storms in American history, stronger than Hurricane Katrina even. And so, what we saw were people struggling to evacuate, struggling to get the resources to safely shelter in place.

We were fortunate enough, through some of our donors and supporters, to move resources to the mutual aid groups, that have been doing the most incredible work on the ground — people really should support them — to move resources to Indigenous communities, that are historically in coastal communities and they know — but we have trust and expertise and experience — how to get people out of the city safely.

JUAN GONZÁLEZ: And I wanted to ask, Flozell Daniels, if you could talk about the role of the oil and gas industry in Louisiana, because, clearly, because of the power grid failure now, all of the refineries are shut down in that area —

JUAN GONZÁLEZ: — until power is back up. So, will there be a battle now over who gets the resources first — the industry or the people — to be able to get back on their feet?

FLOZELL DANIELS JR.: Well, I’ll tell you, Juan, if history is any indication, it absolutely will be a battle. What we’ve seen before, and we continue to see this, is that infrastructure and resources, particularly mission-critical resources after a disaster, get prioritized toward industry and not to people. And, you know, folks get upset when you say that, but that’s what the evidence has been.

The good news, Juan, is that what we have now, that we didn’t have as much of 16 years ago, is social infrastructure. And that is people and neighborhoods and organizations that are deeply committed to a social justice perspective. They have experience and talent by way of organizing and policy advocacy and moving a just and fair agenda. And so, there are folks who have been fighting the good fight, who are already mobilizing to make sure that we can fight for what’s right so that we can mobilize power, so that we can push elected and public officials to do the right thing by way of allocating those resources, and push back on the sort of industrial narrative that they have what’s in our best interest at heart, which has just not been the case.

AMY GOODMAN: Very quickly — very quickly, Flozell, if you could talk about being on Governor John Bel Edwards’ Climate Task Force? Speaking of battles, the battles you’re having on that task force as a group of you try to reduce greenhouse gas emissions and increase regulations, and a group is fighting to increase —

AMY GOODMAN: — the greenhouse gas emissions and support the oil and the fossil fuel industry.

FLOZELL DANIELS JR.: Well, there are two important things that we know, Amy. One is, we finally got the inventory on greenhouse gas emissions, and it showed us what we knew all along: Industry is responsible for more than 60% of the emissions. And so, we’re in a battle to limit and stop those emissions and move to a renewable economy that’s actually going to save us in Louisiana and the entire planet.

I think what you’re finding is, both the scientists, the social justice activists, the folks who are in fenceline communities, particularly along the river, around the chemical refineries, are pushing for an agenda that’s going to allow us to not only stop the emissions, but to also limit and stop the poisoning of the people, the land, the air and the water, while we move towards renewable economies that are actually going to close the racial and gender wealth gaps that we see in Louisiana. Industry, of course, is pushing back on both the data and the science, and they’re pushing back on these social justice imperatives. We’re fortunate to have a community of actors that are going to make sure the narrative is out there and we can push for the kind of recommendations and policy that will help us get there.