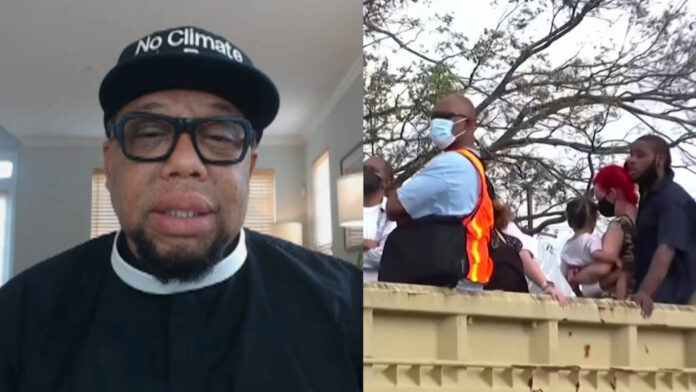 AMY GOODMAN: I want to bring Reverend Lennox Yearwood into the conversation, president of the Hip Hop Caucus, from Shreveport, Louisiana, originally, former Gulf Coast Renewal Campaign, also U.S. Air Force veteran. As the president hails the ending of the War in Afghanistan, something that you have protested against, as well as the War in Iraq, you are dealing with your home state, Louisiana, in a kind of other war, not to mention the Delta in the Delta, COVID in the Delta. Can you talk about what you’re learning about what’s happening and what needs to happen now, after Hurricane Ida?

REV. LENNOX YEARWOOD JR.: Well, Amy and Juan, the reality is this, is that enough is enough. In the words of Fannie Lou Hamer, we are sick and tired of being sick and tired. Today — actually, yesterday, to be honest — but today would be an awesome day to declare a climate emergency. And so, that’s really the case.

We know who is causing these storms. We know who is causing the climate crisis. They’re right there in Louisiana with us: It’s the fossil fuel industry. So we’ve got to stop it. So, the reality right now is that from 16 years ago, from Katrina, to now, is that we need to move past fossil fuels. That’s it. It has to end right now. We have wildfires, droughts. We have hurricanes. We have folks who are displaced, who are hurting, because of this. And so, the time is right now to stop this madness. It’s time to stop this madness and move beyond fossil fuels. No more talk. No more negotiations. It’s time to move on.

You know, this storm was called Hurricane Ida. And for Chevron and BP and Exxon, it should be “Ida one that caused all this mess.” Yeah, “Ida one” — they the one that caused all this mess. And so, we’ve got to move on, Amy. This is ridiculous. And so, it’s time for us to get serious about this climate crisis. The time of playing games with politics, either Democrat or Republican, the time for playing games with this climate crisis is over. It’s time to put humanity first.

JUAN GONZÁLEZ: And, Reverend, what do you say to those folks in Louisiana, in the elite, who say that the state depends on the fossil fuel industry, on oil and gas, for so many jobs and so much income?

REV. LENNOX YEARWOOD JR.: Hogwash. Hogwash. It’s like me saying I’m dependent on something that’s going to kill me. No, that’s — listen, the fossil fuel industry’s business plan means a death sentence for us. That’s ridiculous. How are we going to keep saying that we depend on them, but we’re in our cars packing up? We ain’t got no power. All the power is gone. We’re running for our lives. How is — that’s madness. And so, listen, it is time for us to transition from fossil fuels to clean energy. There’s a number of groups — and my brother earlier said it quite well — number of us on the ground who are trying to do all we can do.

But it’s clear that particularly poor people and particularly Black people and Indigenous people are left behind to die. The inconvenient truth that we have found out is not only the climate crisis, but also white supremacy. And when you mix these things together between issue of the injustice of racism and the injustice of the climate crisis, it is a toxic mix that is destroying us.

And so, we’ve got to move back — move forward. And so, yes, we need an infrastructure plan that has climate in it. We need to have a climate emergency. We need a Green New Deal. We need to get serious. This is ridiculous that we’re sitting up here, people are on the road right now with no gas in their car, people are at home with no electricity suffering in heat, we have seniors, and we’re talking about still maintaining the archaic views of the fossil fuel industry. That has got to stop now.

JUAN GONZÁLEZ: And is it your fear that, similarly to what happened after Hurricane Katrina, that the crisis was used to implement anti-people policies — for instance, the elimination, virtually, of all public schools in New Orleans — that this crisis will be used in the same way by those in power?

REV. LENNOX YEARWOOD JR.: Most definitely. Let me say this. After Katrina, we knew the fossil fuel industry started to create, really, the climate denial platform they were doing. Then they moved to kind of — they moved beyond that now, as well as the policies in the communities, to literally destroy those communities, literally rolling back from public housing, rolling back, closing down Charity Hospital, rolling — I mean, just every aspect that supports the community, they used that to come in. But, listen, they’re putting profit before people, and it causes us just pain.

What I’m saying here to everybody who’s listening, I’m telling you, if you are Republican or you’re Democrat, I don’t care. We have a crisis right now. It’s not about that. People are suffering. If you are an American — and, Amy mentioned, I was an officer in the United States Air Force. And so, I took an oath to fight for this country, and I’m still going to do that. And so, what I’m saying to you is that we have a climate crisis. People are hurting. Literally, earlier this year in Texas, children froze to death. We have folks who are losing their homes in California. We have folks on the road, and they’re running for their lives. We are in a climate emergency. This has got to stop.

So we need to get on the job and make this madness stop. And we can do it. We have the things that could do it before it’s too late. But we’re messing around with this fossil fuel industry, taking their money, which is blood money, which is killing our communities. And that has got to stop. We’re going to have worse storms. We couldn’t even evacuate. This storm went from a dust-up storm, in essence, to a Category 4 in 72 hours. It’s outrageous.

AMY GOODMAN: We have to leave it there, Reverend Lennox Yearwood. We want to thank you so much for being with us, president of the Hip Hop Caucus. And that does it for our show. Happy Birthday to Hany Massoud! I’m Amy Goodman, with Juan González. Stay safe. Wear a mask.