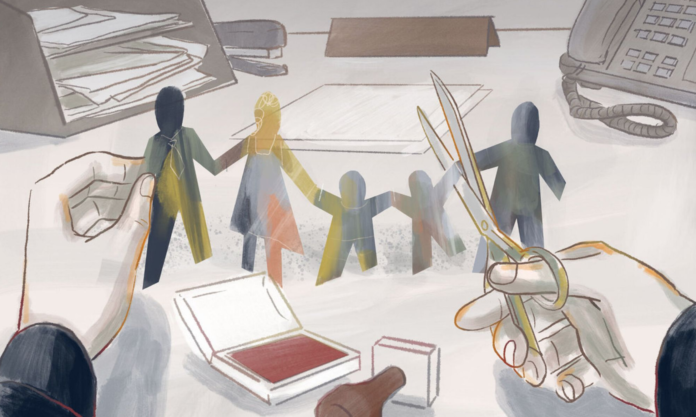 ProPublica is a nonprofit newsroom that investigates abuses of power. Sign up for Dispatches, a newsletter that spotlights wrongdoing around the country, to receive our stories in your inbox every week.

Early last year, the Cook County public guardian grew worried that Illinois’ child welfare agency once again was failing the Spanish-speaking families whose children were in its care.

So Charles Golbert decided to conduct an experiment. For 10 months, lawyers from his office counted the number of new cases that involved Spanish-speaking families. Then the staffers checked how many of those families’ files included a critical document that determines whether the Illinois Department of Children and Family Services must provide them services in Spanish, as required by a federal court order.

Of the 80 or so cases the lawyers identified, Golbert said not one included the so-called language determination form.

“It’s shocking,” Golbert said. “It tells me this is not a priority for DCFS. All of the assignments of Spanish-speaking caseworkers and services and placements are supposed to flow from this initial form. DCFS has not made good on their promises.”

A 2019 ProPublica investigation revealed the extent of DCFS’ failure to comply with the federal consent decree, which came out of a class-action civil rights lawsuit in the 1970s. The court order, known as Burgos, requires the agency to serve Spanish-speaking families in their preferred language and place children in homes where Spanish is preserved. Following the investigation’s publication, the agency’s director, Marc Smith, promised reforms.

Yet more than two years later, DCFS continues to fail to meet the most basic requirements of the court order meant to ensure Spanish-speaking parents understand what they need to do to regain custody of their children, preserve their bond with them and honor the family’s culture.

The lack of compliance with the form may seem technical, but it can have a ripple effect on an entire case. Parents — many of them undocumented immigrants who are already reluctant to come into contact with or speak out against government agencies — can for months or years be assigned caseworkers who don’t speak their language, or face lengthy delays in accessing services in Spanish, all of which prolongs their separation from their children.

The larger issue, advocates, families and some agency workers said, is that none of the officials or organizations with legal authority in the case view the federal consent decree as a priority. What’s more, many advocates have accepted that the court order will not be rigorously enforced and privately concede that an imperfect consent decree is better than none at all.

For years, the Illinois attorney general’s office, which represents DCFS, has rebuffed requests for records on compliance from attorneys representing families who are supposed to be helped by the court order.

Meanwhile, those attorneys, from the Mexican American Legal Defense and Educational Fund, a nonprofit national civil rights organization, have allowed years to pass without monitoring compliance.

DCFS has made marginal progress in the past two years, including a long-awaited update to its internal case management system to better track basic demographic information about families. In the past, ProPublica found, workers had sometimes misclassified or even falsified families’ ethnicity and language preferences.

The system now allows DCFS to more accurately monitor if children of Spanish-speaking parents are living in foster homes where Spanish is not spoken, said agency spokesman Bill McCaffrey. As of July, the agency recorded 19 such violations, about 8% of the roughly 235 children classified as belonging to Burgos families.

“DCFS continues to make progress to ensure that children and families are provided services in the language that they prefer,” McCaffrey said in a statement. “There is more work to be done, and our progress in the past two years in tracking and serving this population demonstrates the commitment from Director Smith and the dedication from our staff in ensuring we provide the best possible outcomes to all children and families.”

McCaffrey said the agency created a Burgos workgroup last September that meets twice a month to address compliance. DCFS also produces monthly reports on violations, though the agency would not provide them to reporters.

He said DCFS was unaware of the survey from Golbert’s office last year. But the agency conducted a separate audit this year to check whether workers were filling out the language determination form. McCaffrey declined to share the outcome of that audit, but he said caseworkers and supervisors were subsequently reminded of the requirement.

Officials from the Cook County public defender’s office, which represents parents in child welfare cases, also said the forms are routinely missing when cases are first brought before a judge. Some still aren’t filled out months later. As a result, parents who don’t speak English are assigned caseworkers who don’t speak Spanish.

“If they don’t speak the same language, there’s no relationship,” said Aaron Goldstein, chief of the civil division of the public defender’s office. “There’s no opportunity to call and say … ‘I noticed you missed a meeting or session or therapy. Work on it.’ … Even if they’re using the interpretation services, so much gets lost in that translation.”

In response to questions from ProPublica, McCaffrey said the agency will monitor the use of the forms “as it works towards compliance” with the 1977 consent decree.

ProPublica’s earlier reporting showed how employees at DCFS and its contracted private agencies sometimes coerced or encouraged Spanish-speaking parents to effectively waive their Burgos rights by choosing English on the forms in hopes of expediting their cases.

That’s what happened to Jorge Matias, the undocumented Guatemalan immigrant father featured in the story. His young son was placed with foster parents who raised him to speak Slovak. As the years passed, Matias could not communicate with his son. He was later deported.

After the story was published, the attorney general’s office sought feedback from MALDEF on the language determination form. The goal, said Annie Thompson, spokeswoman for the office, was to make the form clearer and “encourage families to be candid” about whether they prefer English or Spanish.

In response, MALDEF lawyers said the form was confusing and complicated. But nearly two years later, no changes have been made. Thompson blamed the pandemic, in part, for the delays and said DCFS remains “in the process of making changes.”

Part of the problem is that DCFS lacks enough bilingual caseworkers to meet families’ needs. The agency has 153 bilingual workers despite a 2008 state law that requires DCFS to employ 194 bilingual front-line staff; DCFS has never met this requirement.

Even Matias’ family, which was the subject of a DCFS inspector general report that found that his Burgos rights were violated, has encountered this issue. Matias’ relatives, who have custody of his youngest child, said they asked for a new bilingual caseworker last year but were told none were available.

McCaffrey acknowledged the shortage of bilingual employees. He said the agency is assessing which offices need more bilingual workers. DCFS relies on translators and a telephone language line for interpretation when bilingual workers are unavailable.

“Bilingual staff are overwhelmed with cases, and also helping their caseworkers,” members of the agency’s Latino Advisory Council wrote in draft recommendations to DCFS’ director that were shared during an August meeting. “The language line is not sufficient for assessing safety in many cases.”

It’s not just a DCFS problem; the private agencies that handle casework on behalf of DCFS also lack bilingual staff. Goldstein, from the public defender’s office, shared redacted records from one recent case in which a private social service agency denied a parent a Spanish-speaking case worker. “At this time, our agency does not have any Spanish speaking workers within our department,” an agency employee wrote in a July email.

There hasn’t been an independent monitor to ensure compliance with the consent decree since the 1990s. DCFS has only one employee whose job includes tracking Burgos cases.

MALDEF, which is based in Los Angeles but has an office in Chicago, has made sporadic attempts over the years to get the records it would need to monitor DCFS. In August 2019, the organization asked the state attorney general’s office for records — the first time it had requested the information since 2012. MALDEF never received the documents and did not follow up after the initial inquiry.

Thompson called the request “extremely voluminous” but, after inquiries from ProPublica, said the attorney general’s office would turn over the records “in the coming weeks.”

The Burgos litigation had been inactive for nearly a decade before the 2019 ProPublica investigation. MALDEF filed an appearance in court the week the story was published.

Thomas Saenz, president and general counsel at MALDEF, said the organization has the resources and staffing to continue to represent Latino families in the litigation but must consider its legal strategy before moving forward. Among the options: seeking support in the state legislature for reforms, asking the Biden administration to use its authority to demand DCFS do a better job of providing bilingual services as required by federal law, or returning to court to request an independent monitor.

“When you have an agency with a record of recalcitrance, despite public attention in continuing to neglect its responsibilities, then that is an appropriate time for outside, independent, well-resourced monitoring,” Saenz said. “Otherwise you’re not going to change the culture.”

But returning to federal court could be risky because of changes in civil rights law since the 1970s, several attorneys familiar with the court order said. Among the possibilities: a judge could do away with the protections Burgos provides.

McCaffrey said DCFS officials do not believe an outside monitor is needed.

There is some traction to bring about reforms through state law. This month Gov. J.B. Pritzker signed into law a bill that creates a task force to examine the disparate racial impacts of DCFS policy on the families that enter the child welfare system.

One small piece of their mandate — inspired by the ProPublica story, said Tanya Gassenheimer, an attorney with the Shriver Center on Poverty Law — is to explore “policies and protocols that honor language, culture and heritage in identity formation and familial relationships.”

“It sounds like it’s just a language barrier, but language is tied to so many other things: one’s identity, connecting to parents, grandparents, extended family and one’s whole culture,” said Gassenheimer, whose organization will help lead the task force. “When DCFS does not provide services in one’s language, that is so harmful to the child, the parents and the family.”

State Rep. Delia Ramirez, a Chicago Democrat who intends to sit on the task force and highlight the importance of the consent decree, recently met with DCFS officials to follow up on earlier concerns about how the agency deals with Spanish-speaking families. She said she was glad to hear of some of the reforms, especially the agency’s new tracking system for Burgos violations. But she was less impressed with another accomplishment DCFS touted: that it’s translating its website into Spanish.

Black Visions Collective: We Need to Abolish the Police & End Militarized Occupations of Our Cities