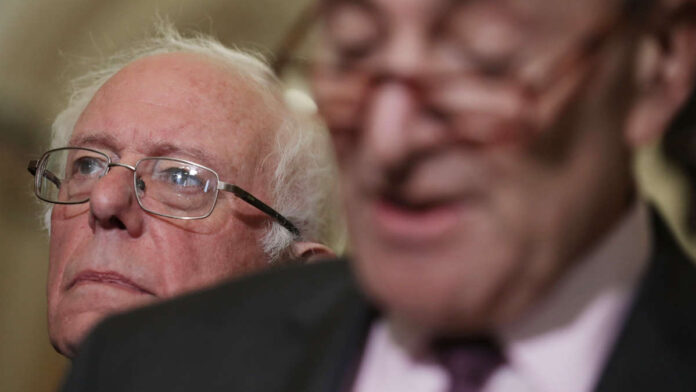 Senate Democrats are in talks over a $6 trillion reconciliation package that would sidestep Republican opposition and contain provisions over and above President Joe Biden’s infrastructure proposals to address the climate crisis and expand Medicare.

The package would adopt many provisions from Biden’s twin economic packages, the $2.25 trillion American Jobs Plan and the $1.9 trillion American Families Plan. It would include provisions to expand the child tax credit and establish universal pre-kindergarten and paid leave, according to The Washington Post — all provisions that are currently missing from the infrastructure proposal offered by centrist senators, which has been panned by progressives.

The package, which is still largely in flux, would also include proposals to increase taxes on corporations and the wealthy, as Biden has proposed.

In addition to Biden’s proposals, the Democrats are considering, at the behest of Sen. Bernie Sanders (I-Vermont), lowering the Medicare age from 65 to 60 and expanding the program to include coverage for vision and dental. It would also include provisions, presumably in a similar vein to previous proposals from Sanders and House Democrats, to lower the cost of prescription drugs within the program.

The plan is yet to be fully unveiled, but Democrats are reportedly discussing immigration reforms to include in the package. Sanders has also promised that the package will include proposals to address the climate crisis — one of the top priorities for Sanders and fellow progressives. Climate has been one of the touchiest areas in bipartisan negotiations for infrastructure and has been omitted from previous Republican and bipartisan versions of the bill, much to the left’s chagrin.

If Democrats are able to use budget reconciliation for the bill, they can sidestep Republicans’ likely objections to the climate proposals, tax hikes and price tag in general. Republican opposition will certainly come, since some Republicans have even expressed opposition to the moderates’ infrastructure offer — despite the fact that the moderates’ plan is only very slightly larger than the Senate Republicans’ offer in terms of new spending.

Reconciliation would allow the Senate to pass their version of the bill with a simple majority, using Vice President Kamala Harris’s vote. It’s unclear if Democrats will be allowed to use reconciliation on the bill, however, as every proposal would have to be cleared by the Senate parliamentarian as budget-related.

If a particular proposal is shot down by the parliamentarian, similar to how Sanders’s $15 an hour federal minimum wage proposal was shot down earlier this year, then it would likely be removed from consideration under reconciliation.

That doesn’t necessarily mean that the proposal would be dead, and as Democrats pointed out during the minimum wage hike debate, Democrats could still replace the parliamentarian or overrule the decision with the approval of Harris. But that didn’t happen for the minimum wage proposal, and it’s unlikely that it would happen for infrastructure and related proposals.

Democrats have been planning for two concurrent plans on the infrastructure bill and other priorities for weeks: While they’re negotiating with centrists and Republicans on the paring down of the infrastructure bill, they’re also working on the new plan to wrap in proposals that have been rejected by the bipartisan negotiations and adding provisions of their own that wouldn’t otherwise garner enough support to pass.

But Senate Democrats would also have to stand unanimously behind the newer bill if they are to pass it through reconciliation, and that’s not a given. Figures like Senators Joe Manchin (D-West Virginia) and Kyrsten Sinema (D-Arizona), who are both involved in the bipartisan infrastructure talks, would be likely defectors. And, as the two have demonstrated with other issues, like the filibuster, it’s not easy to win their support once they have voiced opposition.

Manchin in particular has said, adamantly, that he won’t support nearly any Democratic bill, infrastructure or otherwise, without bipartisan support — even though he has, indeed, voted for partisan bills like the last stimulus bill though it garnered zero Republican votes. Behind closed doors, Manchin has been on a mission to prove that bipartisanship works, and was recently revealed to be colluding with billionaire donors to do so.

But Republicans have seemingly been just as adamantly determined to prove that bipartisanship is dead. Sen. Mitch McConnell (R-Kentucky) on Thursday rejected Manchin’s latest attempt at bipartisanship, saying that no Republicans would agree to the West Virginia senator’s compromise on voting rights — even though Manchin’s compromise bill included many of the proposals for restricting voting rights straight out of the Republican voter-suppression guide.