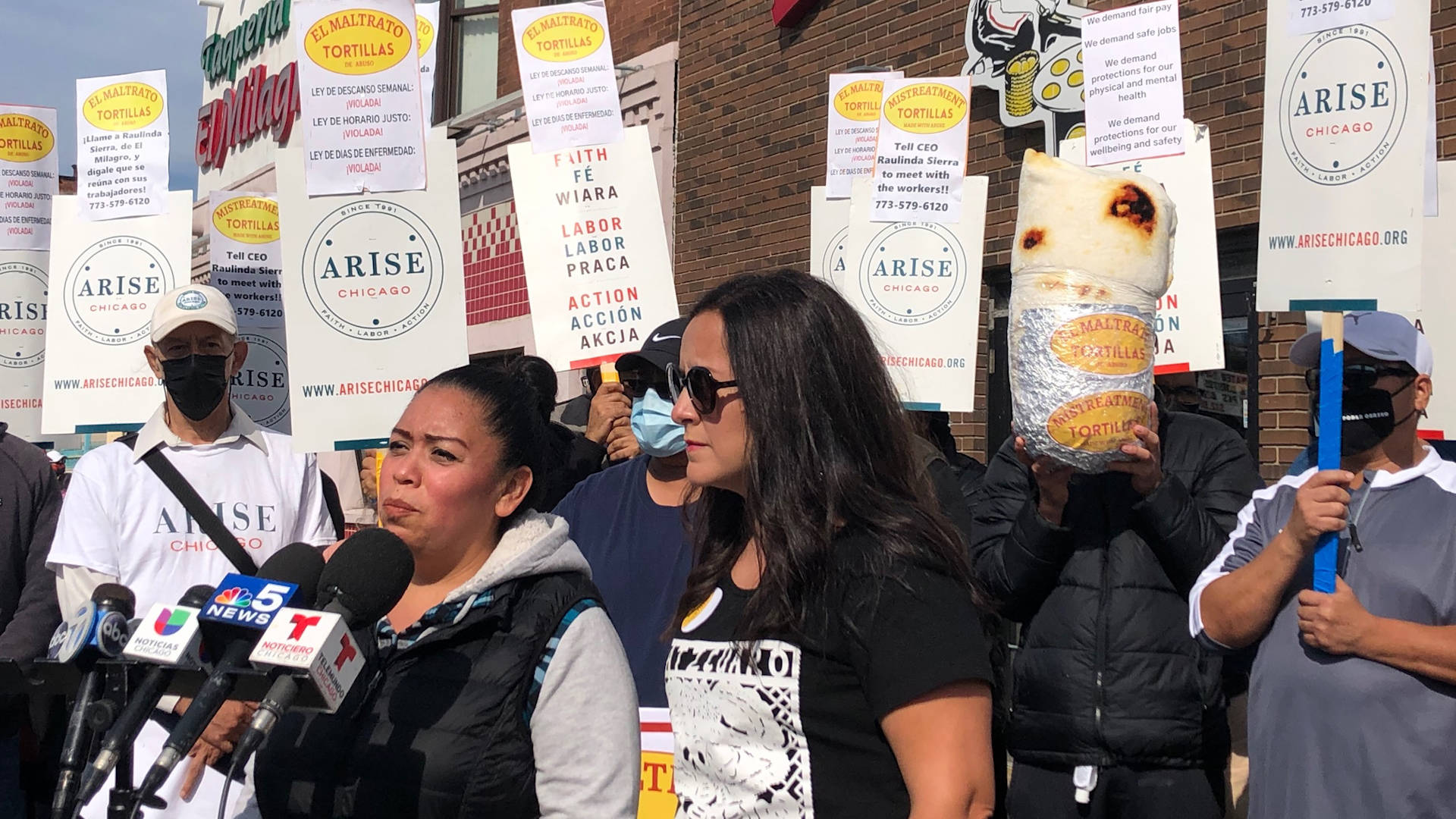 We end today’s show in Chicago, where workers at El Milagro tortilla plants staged a temporary walkout to protest low pay, staff shortages and abusive working conditions, including intimidation and sexual harassment. When they returned to work, they discovered management had locked them out in retaliation. This is El Milagro worker Irma Gonzalez.

IRMA GONZALEZ: [translated] They did not let us go back to work. We had our personal belongings inside the plant. In my case, I’m pregnant. My medicine was still inside, and they denied us entry. … This is not fair. We are simply fighting for our rights. We’re not trying to harm the company.

AMY GOODMAN: El Milagro claims an ongoing tortilla shortage is due to supply chain issues, but organizers say the company has lost staff due to their poor treatment of workers, including their mishandling of the pandemic. Last year, dozens of workers got sick during a COVID outbreak. Five died. This is another El Milagro worker, Martin Salas.

MARTIN SALAS: [translated] I pack 80 tortilla packages per minute. I load a case, put it on a pallet and come right back, because if I don’t keep up this pace, tortillas will fall off from the machine, and they’ll blame me.

AMY GOODMAN: Workers have given El Milagro management until end of day Wednesday to respond to their demands.

The company was founded in Chicago in 1950 by Raul Lopez, a Mexican immigrant, and sells tortillas around the country.

For more, we go to Chicago to speak with Jorge Mújica, strategic campaigns organizer at Arise Chicago.

Jorge, you’ve been working closely with the workers for several years. Can you talk about what the demands are and what will happen on Wednesday?

On Wednesday, nothing yet, because we gave — or, the workers gave the company a deadline to the end of the day. But, on Thursday, surely, the workers are going to come back and demand answers from the company.

Their main demands are a fair wage scale, because the company is paying only 40 cents above minimum wage, and at the same time it’s advertising new jobs for $16, so 60 cents above people who have been working there for 10, 15, 20 and 25 years. That’s the most important demand. They say that El Milagro needs to attract new workers, and that is only going to happen if they increase the wages.

And the other one is definitely to reduce the speed of the machines. What workers are telling us is that the company, instead of offering better wages and hiring more people, is just cranking up the machines. So, they have to pack 80 packages per minute — I mean, less than one second to pack 12 tortillas, put it in a paper envelope and stack them in the boxes. So, that’s insane. They say, “OK, they increase the speed of the machines, but they can’t increase our speed. We are not machines.” So, they want to put a stop on that.

JUAN GONZÁLEZ: And, Jorge, could you talk, for people who are not familiar with El Milagro, the importance of this facility and the plants that it has in the Mexican American community — El Milagro tortillas are famous throughout Chicago and the Midwest — and the fact that it’s largely Mexican ownership, as well?

JORGE MÚJICA: Yes, they are the most famous and largest tortilla maker in the Midwest. If you go by one of the plants — they have five plants and three restaurants. If you go to one of the plants at 4:00 in the morning, you would see trucks lining up from Ohio, from Iowa, from Wisconsin, Michigan. I mean, this is amazing, millions of tortillas every day. They are incredibly famous. They are good. And they are good because the workers really, you know, put their best effort to produce these tortillas.

And this is family-owned. Just one family controls the whole consortium. And they are still, you know, with practices belonging in the 1970s and the 1980s. They only buy a couple new machines every year. But conditions are really awful. This is a sweatshop.

JUAN GONZÁLEZ: And last year, over 80 of the employees came down with COVID, and five died? What kind of health and safety protocols were they using there?

JORGE MÚJICA: None at all. And we have a couple pretty much criminal behaviors there, where they forbade workers to wear face masks. They told them that, no, the workforce was going to feel unstable if they saw anybody wearing a face mask. So they didn’t allow anyone to do it for a while, until, of course, you know, disease spread and people started dying. And then they shut down one of the five plants to clean it up.

But, as we told the workers last year, you know, the machines don’t sneeze. This is people-to-people, person-to-person contagion. So, the workers got up together and imposed some basic precautions. And then, down the line, the company decided to respect social distancing, etc.

AMY GOODMAN: Jorge, can you —

JUAN GONZÁLEZ: And what about the sexual harassment allegations, as well?

JORGE MÚJICA: Sorry. Yes, there are several sexual harassment accusations. Workers complain that they have denounced this to management, and what management does is to move the supervisor from one plant to the next one, instead of solving the problem, instead of training their supervisors, instead of raising really good standards.

AMY GOODMAN: And, Jorge, can you talk about what happened to the workers after they had their rally last week? We just played Irma Gonzalez talking about being pregnant and being locked out of the plant. She couldn’t get her medication. What the plans are for Wednesday?

JORGE MÚJICA: Yeah, well, we had call to the police, and the police came and opened up the plant to allow the workers to get their personal belongings. And the next day, we went with the workers to report to human resources, and human resources simply gave up, saying, “We will pay you for the hours you lost yesterday in the lockout.” So, it was a round victory for workers.

AMY GOODMAN: Jorge Mújica, we want to thank you so much for being with us, strategic campaigns organizer at Arise Chicago, working closely with the El Milagro workers.

And that does it for our show. Democracy Now! is currently accepting applications for two positions: director of finance and administration and human resources manager. Learn more and apply at democracynow.org.