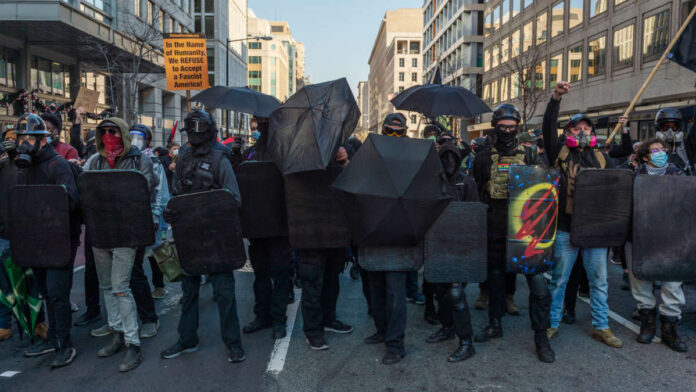 We are living through an era marked not just by the explosive violence of the far-right, but by the specific targeting of antifascist activists by the state and white nationalists alike. The term “antifa” has escaped its practical usage and is now used as a mythic signifier for all things left-wing and chaotic in the right-wing imagination, which has only increased seemingly impulsive acts of violence against anti-racist organizers. This is not a new history, and itreminds of us of a heart-wrenching tragedy from the 1980s that is still in the memory of many antifascists demonstrating in the streets: The Greensboro Massacre. Here neo-Nazis and Klansman jointly planned the murder of members of the Workers Viewpoint Organization, which was involved multi-racial unionization efforts and was holding anti-Klan events. These murderers ended up being acquitted, presenting an all too real image of white immunity.

Below is an excerpt from my recent book, Why We Fight: Essays on Fascism, Resistance, and Surviving the Apocalypse, in a chapter that looks at the persistent presence of right-wing violence and its evidence in the Greensboro Massacre and the mass killings that have come later. There is a common story here, one that is still playing out, and this can inform how antifascists see themselves and the centrality of their work in defending against white vigilante brutality.

To comprehend the reality of white nationalist violence, both historic and impending, is to understand the central function of white identity: violence againstthe “Other.” The shift from neo-Nazis to the “alt-right” is one of minor philosophic changes and branding, but the underlying cause and the overarching message retain a key component of revolutionary upheaval, of the mythic battle for “survival of their race,” and the desire for power. Far right leader Richard Spencer, for his part, has shifted his rhetoric from one of simply the preservation of “identity” to the need to take and exercise power in a dominating way. This is an acknowledgement that much of the language of white identity that has filtered over from the European identitarian movement is disingenuous: What Spencer and likeminded white nationalists want from their ethnostate is a Great White Empire. This vision is one that refuses to quit, that will take down opponents as it needs to; its only reason to refuse violence is the optics. As the crisis of collapsing capitalism, ecologies, and political structures continue to swell, as economic instability and climate chaos increases conflict, white nationalists’ capacity expands with infinite inertia. The triggers will only multiply, the conditions will only become more conducive. This is not simply Trump’s America, it is every America to come.

Get the latest news and thought-provoking analysis from Truthout.

For the anti-fascist left, this ongoing white nationalism should be a reality check for what we face. The presence of white nationalism is not just ideological, or a political proposition, but it is the implicit encasement of violence; an attack looking for a victim. The surprising growth of the “alt-right” has had one less predicted effect: that their violent rhetoric and vulgar racialism would so thoroughly infect the conservative communities they tried to cozy up to. Their violence has extended to the MAGA-Belt, the Independent Trumpists whose anger has become explosive.

In 2020, as the coronavirus raged, anti-mask protesters denied its reality, and Trump ramped up racist fears as a campaign strategy, Derek Chauvin leaned on George Floyd’s neck for more than nine minutes until Floyd died. A complete insurgency, unseen for half a century, came in its wake, and so did the “whitelash.”

The Proud Boys, which had been a dominant force on the far right since the “alt-right” decline post-Charlottesville, came back into the fray, as did white vigilantes around the country. The Proud Boys, Patriot Prayer and other far right groups had become a constant presence in cities like Portland, Oregon, by this point, engaging in targeted attacks and street battles since Trump’s election. While they often use the mutated rhetoric of self-defense or describe themselves as conservative fraternities, their binding force is violence. The ideology itself has slipped a bit, of less importance than committing to the attack of opponents, where violence itself has become explicitly central.

At the same time, open white nationalism itself has moved further right as the “bowl patrol” celebrates Dylann Roof, and Atomwaffen Division and The Base prepare for mass murder as an accelerationist path to collapse. From the GOP to the “patriot” subculture to the Nazis frothing for action, violence is passed along as a fashion for identity. The Proud Boy leadership continues to play dumbfounded by accusations of violence as the group’s President Enrique Tarrio claims that violence is disallowed, disavows the violence of members and pretends that Proud Boys accused of violence were never actually members of the organization. As the GOP stokes a “vigilante identity” across the country, it only sends messages of approval to groups like the Proud Boys that their violence is part of a greater plan to restore America, and the violence only spreads like a cultural pandemic. While it is often the edges of these organizations that engage in the most egregious of the violence (since its leadership has too much to lose), there is a straight line between the inner circle and the assaults and murders.

The Greensboro Massacre happened just over 40 years ago, and yet it feels like the ghost of an earlier time. It was only this year that the City of Greensboro, North Carolina, issued an apology to the victims, and one survivor, Reverend Nelson Johnson, received it. It got little news coverage; it was an old story that has been largely lost, but what really robbed it in the news cycle was that it was too familiar. We know white nationalist violence now; we live with it every day.

The fringe of the white nationalist movement is an essential part of it, and it is where the move towards real-life violence takes place. White nationalist organizations will (almost) never “condone” the murders in the practical, instructive sense — but they don’t have to: their message has been heard loud and clear. Their ideas have violence at the core, their behavior is poised and prepared for violence, the violence is the logical outcome of everything they have built. Spencer has argued that his mission is for a “peaceful ethnic cleaning,” but this is a contradiction in terms. This creates a perpetual dilemma for the communities white nationalists target, both in active points of confrontation and in daily life.

The potential of white nationalism only grows without resistance to stifle it. Conscious community defense is the only thing that can weather the storm. We have to wrestle with the reality that the far right’s violence is genocidal and persistent and will never evaporate on its own.

It was the violence of the encroaching Trump era that turned anti-fascism into a mass movement, the threats of the Proud Boys that hardened organizations, the terrorist killings in synagogues and mosques that created a wall of persistent refusal. What white nationalists think will push back their opposition — their capacity for violence — is what fills the streets with anti-fascists. The culture of apocalyptic violence carries with it an endemic hurt, one that will paint an entire generation with fear and mourning, and also the seeds of a new type of social identity, one that understands this feeling of loss in the collective retribution that is faced on those responsible. We are seeing new waves of anti-fascism, the kernel of a new plurality defined by compassion, mutual aid and the willingness to disrupt the systems that never served us.

In an era of mass shootings and global pandemics, we have been marked by an inescapable trauma, but it is also pushing us back into a community of care and defense. In a society where we rarely create the space to mourn, the growing mass actions against violence have taken the role of a public reckoning, transmuting that hurt back into a shield wall. We don’t avoid the streets because of white supremacists’ violence — we overwhelm the streets because of it. We multiply, reproduce, change our spaces and our relationships and ourselves because of it. We escalate our expectations, for safety and ecstatic living, because we know the antithesis. We come out because we are afraid, and this is the only way to the other side.