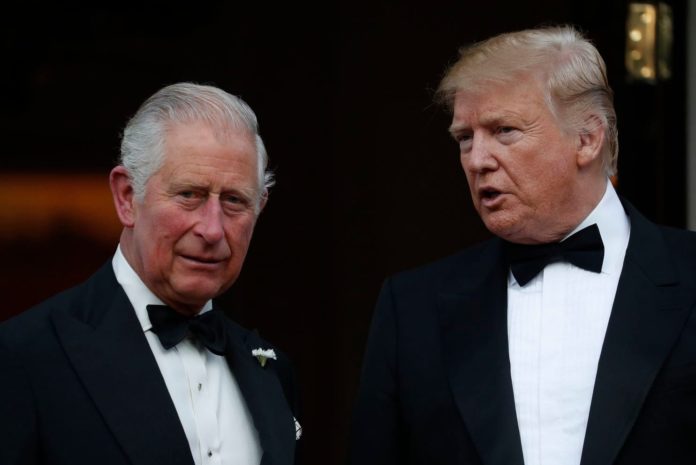 His eldest daughter, Ivanka, could not change his mind.

And now, President Trump, who has called global warming a “Chinese hoax” and pulled the United States out of the Paris climate agreement, appears similarly unmoved by an appeal from British royalty.

The president left a 90-minute meeting this week with Charles, Prince of Wales, unconvinced that the climate is warming, which it is, according to overwhelming scientific consensus. The Earth’s average surface temperature in 2018 was the fourth-highest since 1880, when record-keeping began. That means that the past five years have been the warmest in recorded history.

But the president has other beliefs.

“I believe that there’s a change in weather, and I think it changes both ways,” he said in a wide-ranging interview with Piers Morgan on “Good Morning Britain” that aired Wednesday morning. “Don’t forget it used to be called global warming. That wasn’t working. Then it was called climate change. Now it’s actually called extreme weather, because with extreme weather, you can’t miss.”

Trump cited severe conditions from long ago as evidence for his views, even though scientists say extreme events are becoming more common, driven by climate change.

“Forty years ago, we had the worst tornado binge we’ve ever had,” Trump said. “In the 1890s, we had our worst hurricanes.”

[In U.K. trip, Trump’s not-so-special relationship with Theresa May is on display]

He said he was impressed by the passion displayed by the Prince of Wales, who has been an outspoken advocate on climate issues. The two were supposed to meet for 15 minutes, Trump said, but ended up speaking for an hour and a half. He said he shared the prince’s desire for a “good climate as opposed to a disaster.”

But the president blamed China, India and Russia for polluting the environment and said the United States was responsible for “among the cleanest climates.”

Carbon dioxide emissions by the United States, the world’s second-largest emitter, rose an estimated 3.4 percent in 2018, according to findings published in January by the independent economic research firm Rhodium Group. And as the White House gears up to counter the consensus on climate change, it has tapped William Happer, a National Security Council senior director, to lead the effort. Happer once said, “The demonization of carbon dioxide is just like the demonization of the poor Jews under Hitler.” President Trump and Britain’s Prince Charles stand outside Winfield House, the residence of the U.S. ambassador to Britain, in Regent’s Park, London, on Tuesday. (Alastair Grant/AP)

He also said he wanted to look into the issue of suppressors that muffle the sound of gunfire, one of which was used in the shooting that left 12 people dead last week in Virginia Beach.

“What’s happening is crazy,” Trump said of the scourge of gun violence. Yet he also pointed to knife crime in Britain and 2015 attacks at the Bataclan theater in Paris — carried out by Islamic State-inspired gunmen, whom Trump termed a “wacky group of people” — in an apparent suggestion that brutality was not a uniquely American phenomenon. Morgan replied, “More people were shot dead in America last week than died from guns in Paris since the Second World War.”

So, too, Trump discussed several personal feuds. Morgan, the “Good Morning Britain” host and former champion of “The Celebrity Apprentice,” told Trump he thought his continued attacks on John McCain, the late Republican senator from Arizona, were “beneath” him.

“No, I don’t attack him,” Trump said. “People ask me, like you’re asking me. I didn’t bring his name up; you did.” Of the directive to obscure the USS John S. McCain warship while Trump was visiting Japan, the president said he bore no responsibility for it, adding, “I’m not even sure it happened.”

He also blamed the media for stoking conflict between him and Meghan, Duchess of Sussex. When he said he had not realized she had been “nasty” toward him, he was not labeling her “nasty,” he asserted, instead only observing that she had criticized him. In fact, when asked about Meghan Markle’s criticism of him before the 2016 election, he told the Sun newspaper, “I didn’t know that she was nasty.”

Trump remarked to Morgan: “Hey, join the crowd, right?” He said of the American member of the British royal family, “I hope she enjoys her life.”

As for himself, Trump said being hosted in Britain, including for a lavish state banquet in Buckingham Palace, was among the highlights of his life.

As the interview was airing Wednesday morning, Trump took to Twitter to play down protests that brought tens of thousands of peopleto the streets of London, suggesting falsely that the crowds had gathered in support of him.

I kept hearing that there would be “massive” rallies against me in the UK, but it was quite the opposite. The big crowds, which the Corrupt Media hates to show, were those that gathered in support of the USA and me. They were big & enthusiastic as opposed to the organized flops!

He also lashed out at former vice president Joe Biden, whose presidential campaign on Tuesday acknowledged lifting language from other groups for its education and climate plans.

Plagiarism charge against Sleepy Joe Biden on his ridiculous Climate Change Plan is a big problem, but the Corrupt Media will save him. His other problem is that he is drawing flies, not people, to his Rallies. Nobody is showing up, I mean nobody. You can’t win without people!

Sizing up his 2020 competitors, Trump offered: “There’s no Winston Churchill in the group. Let me put it that way.”

Morgan, who gave the president a monogrammed Winston Churchill hat, also offered him an opportunity to justify some controversial decisions he has made, as president and in his personal life.

Asked why he had banned transgender people from serving in the military, Trump said there were too many complications that arose from gender reassignment surgery and related drugs.

“You would actually have to break rules and regulations in order to have that,” Trump said. Although he was “proud” of troops of all identities, he said, “you have to have a standard, and you have to stick by that.”

When it came to his own decision not to serve in the military during the Vietnam War — he received four student deferments and one medical deferment for bone spurs — Trump said he was “never a fan of that war.”

“I’ll be honest with you,” he said. “I thought it was a terrible war.”

Trump joins European leaders this week in marking the 75th anniversary of D-Day and the Battle of Normandy, which resulted in the Allied liberation of Western Europe from the Nazis. [first seen on Washington Post]

How We Calculated the True Tax Rates of the Wealthiest

Renters Are Calling for Direct Cash Assistance as Evictions Loom