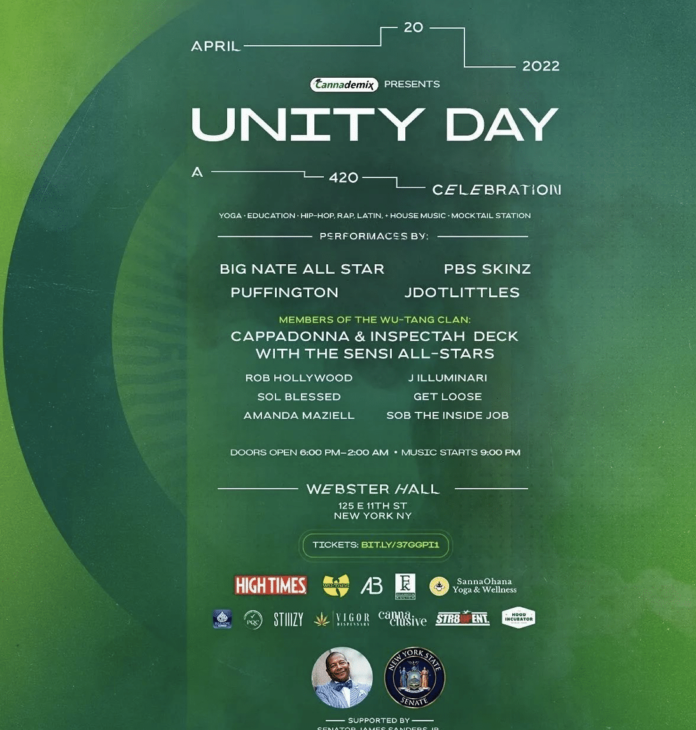 I don’t need to explain to you what 4/20 is about. If you’re reading this, you already know the day is for celebrating the plant—anything else is just noise. While I’ve long advocated that this is NOT the day to try and launch your brand, or drop a new SKU, if there’s one thing I’m sure of, it’s that the first ingredient for a successful celebration is community; so it’s only natural we do something big.

So here’s the rundown: My buddy Doja EK came to me with this idea a few months back of doing a Hippie Hill-style smokeout in Manhattan. Obviously, I was immediately interested—it’s where High Times was born; it’s where I was born, and 4/20 in the Big Apple has ALWAYS been special, so now that legalization has come and COVID is basically over, let’s get after it.

Now Doja had already done an event with Astor Club last year, and had been recruiting. He’d talked to California legends like Alien Labs, Green Dawg, The Fire Society. He’d connected with New York heavies like the Haymaker team, On the Revel & Buddy’s Bodega. Everyone was in alignment, we’re going to do it for the culture—no infrastructure, no tickets, just homies & headstash, all as one.

Somewhere along the line, an announcement was rushed with a ton of logos on it and, understandably, that left a lot of others feeling on the outside of something that was always supposed to involve all of us, so we’ve flipped the script a bit. No more logos, no more brand names—just an open invitation to anyone, local or tourist, transplant or visitor.

Next Wednesday, to celebrate the highest of holy days, we will descend on a random outdoor location in New York. There will be no (reasonable) capacity. There will be no tickets or fees. Just a whole lot of pot heads lighting up together in celebration of our favorite plant, in one of the greatest cities in the world, on the cusp of its legal cannabis market. We’ll announce the location that morning so as not to give the fuzz too much of a heads up, so if you’d like to be notified of where we’re meeting, RSVP here.

Whether you buy from a guy or grow your own, come pull up and sesh with us. We’re trying to smell ALL the flowers!

But that’s not all!

Since announcing this intention to return home for this, an enormous outpouring of support has come my way. And with that, a whole itinerary of other events happening around our event started hitting my desk. Now as I said, this day, our party—this was always about the people, so in that spirit, here are a few other things I plan on pulling up to, and I hope to see y’all there as well! Come find me and we’ll burn one together—it’s going to be a week to remember!

After we wrap up at our sesh, the official afterparty is going to be held at the iconic institution Webster Hall, for an event dubbed Unity Day. Produced by the homies at Cannademix, and officially cosigned by Senator Sanders office, the event will feature performances by Wu-Tang’s Inspectah Deck and Cappadonna. Rocking from 6 p.m. all the way until 2 a.m., this is our late night pull up FOR SURE. I used to throw shows at this venue, so this one is a real full circle moment for me, and I’d love for you all to be there. They invited the weed kid back!!! Grab tickets for this one here and let’s close out the night together.

Another evening sesh worth attending that night is the release party for Banana Certz, the collab between Jokes Up Certz and Golden State Banana. The event, thrown by Premium Sesh, runs from 7 p.m. until late. I’m not entirely sure the location of the event, but I imagine they don’t want just anyone to pull up, so they probably tell you after you buy your access. Tickets are $40, and available here. In Certz’s own words, this collab is about “closing the gap” between the coasts, and putting the key operators in the same room. That’s definitely a vibe we can get with!

In case you’re looking to celebrate with live music, either Phish at the Garden or the Cannaval in Jersey seem like the best options. Now, while I certainly align with the Dead, I never really got Phish, so the hip-hop event in NJ would be my pick. Featuring performances by Jim Jones, Dave East, Trav, Maino, Yung LB & more, this one looks like it’s going to have all the energy you’ll need to keep rocking through what tends to be a drowsy day. Tickets here.

Also, while you’re here let me throw in some extra selfless promotion: If you’re around the City on the 19th, I’ll be speaking on building media relationships for Cannaclusive’s event at Soho Works. I’ve also got my guy Andrew Ward from Benzinga (and here), as well as Alexis Isaacs from Mattio and Keith Nelson Jr. from Men’s Health on the panel, so it should be a great conversation. RSVP here to get our cheat codes.

If California is still in the Building…

Finally, and as a little bonus for those still in California (if you’re not going to Hippy Hill!), and Los Angeles specifically (if you’ve read this long, you deserve it!), I recommend checking out the event High Rise is having at the Green Street building. That’s where I’d be if I was in town!